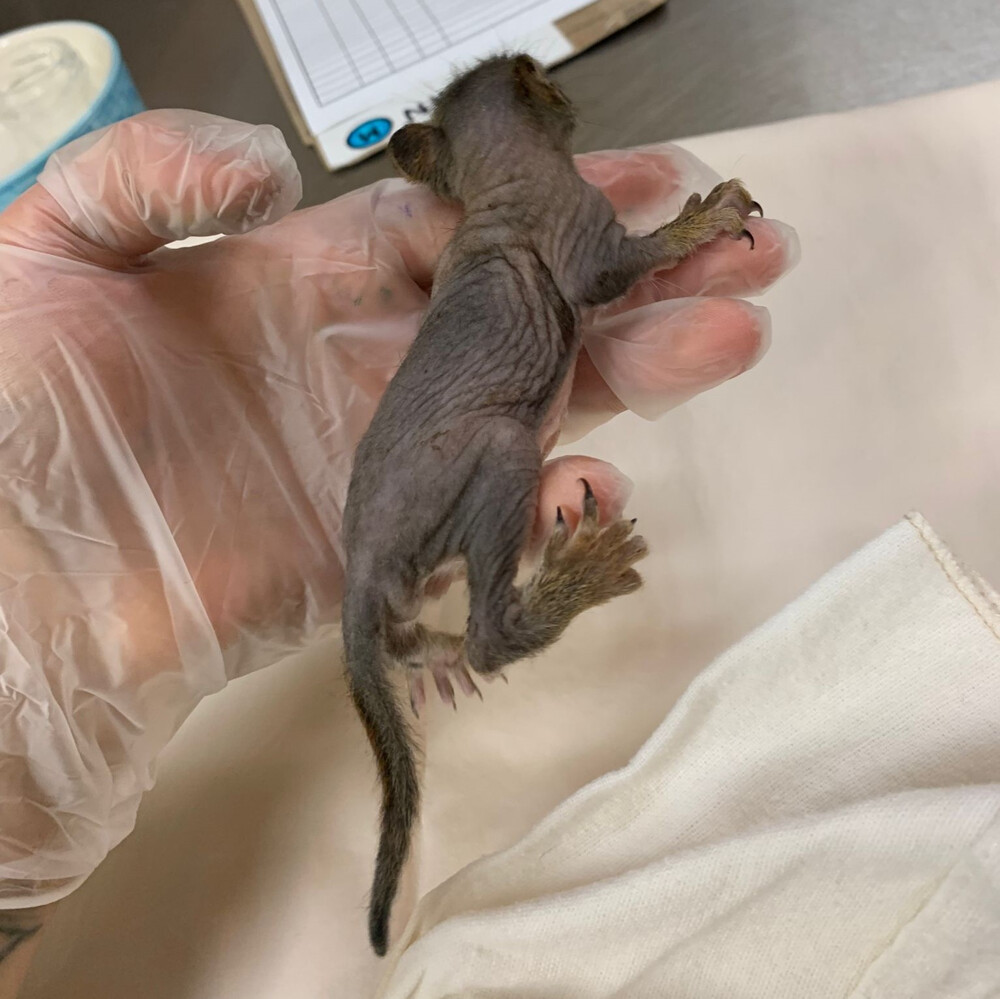 Huddling together for comfort and weighing just 60 grams each, these young squirrels definitely should have still been with their mothers when they arrived into care. When thinking of baby season for wild animals, many of us think of Spring and Summer, but there’s always the chance of late arrivals. The arrival of four young Red Squirrels at Wild ARC is proof of that!

The first to arrive was found after his mother had been hit and killed by a car while carrying him. The kind person who found him brought him to Wild ARC for help right away. Luckily, the young squirrel didn’t have any injuries, but was in shock and hypothermic as a result of the accident he’d been in. In addition to the trauma of being orphaned, he arrived with nearly no fur at all due to an infestation of mites! The rehabilitation team began working quickly to stabilize him so he could receive parasite treatment as soon as possible, and begin the process of re-growing his fur.

Fur loss is common in animals with heavy mite infestations. Slowly but surely, our rehabilitation team has monitored his fur growth and expect he’ll soon be covered and fluffy again!

With a rigorous fluid therapy schedule, specialized formula and food, and lots of time to rest and gain his strength back in an incubator, the Wild ARC team had their hands full with this late baby. As an uncommon patient at Wild ARC, typically only one, or rarely two, baby Red Squirrels are admitted every other year. So when another group of three showed up, the team was a bit surprised but ready for the challenge!

Three additional Red Squirrels were brought in a few days after the first squirrel had arrived. They had been found alone on a hiking trail. Cold, dehydrated, and covered in fleas, it was likely they had crawled out of their nest looking for food after their mother hadn’t come back. Again, the kind person who found them rushed them into care at Wild ARC, which gave them the best chance at recovery.

By this point, the first Red Squirrel was doing much better, and while still hairless, no longer had mites. The trio was given a few days to stabilize and be treated for fleas before one was introduced to the solo furless squirrel – it’s always best to raise young animals with their own species whenever possible. After a vocal introduction, they quickly accepted their new naked “brother”.

While young, these Red Squirrels all arrived with their eyes open and were able to eat solid food, so we’re optimistic for their release back to the wild before winter (provided everyone’s furred and ready!). In the meantime, they’re undergoing frequent weight checks to ensure they’re meeting appropriate growth milestones, developing natural behaviours like foraging and climbing, and getting specialized diets to keep them healthy. This group has been a lot of work, and will take even more to get them ready to be the wild squirrels they were always meant to be!

You can help them get the care they need by donating today! If the cost of care is raised for this patient, additional funds will provide care for other wild animals in need.