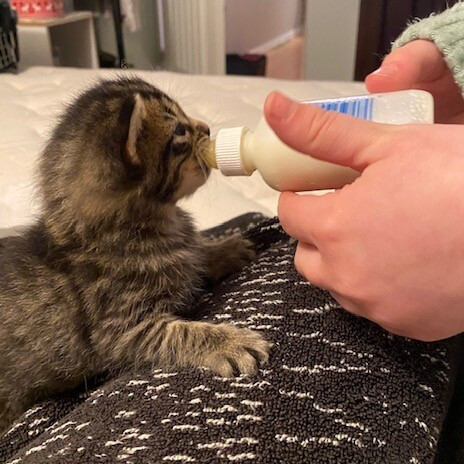 When Fred and his siblings were just two weeks old, their mama sadly disappeared. Fred and his siblings were tiny and helpless - they would not have been able to survive without her constant care. Their loving human family knew that they could not give the kittens the 24/7 attention they needed at such a vulnerable age, so they made the very difficult decision to bring the litter into the shelter to get the care they needed.

Fred had been doing well with round-the-clock care and frequent bottle feeding, however as his siblings began to grow and find their own forever families, his foster family noticed that he was having urinary issues. When he was 10 weeks old, blood was found in his urine - a very concerning discovery for such a small kitten. The vet team found that Fred had calcium oxalate stones (a common kidney and bladder stone in cats) as well as staph bacteria in his urine, indicating a urinary tract infection. Fred urgently needed antibiotics and a specialized diet to help him get healthy. He put on a brave face but he must have been in so much pain.

Poor Fred has been in and out of vet care for quite a while now, getting tested and re-tested as his foster family keeps a close eye on his health. His urinary issues have been difficult to manage and the vet team has tried a number of different treatments, including antibiotics and special foods, over the past few months. Since he's still a kitten, just five months old, it's important that he's getting a proper diet for nutrition and growth, while also managing his urinary issues.

Fred's really been settling in with his foster family and definitely adds his flair to the place! Despite his health problems, he loves to race around with the human kids, dogs and other cats. He's a very sweet big boy now, though it's taken him a while to put on weight with his ongoing health complications. We just know that once they're under control, Fred will make such a wonderful addition to a lucky family.

Personal updates for Fred will be provided to anyone who donates to his care.

*Goal includes: antibiotics, medication, testing and treatment, regular health check, and daily care for Fred until he's ready for adoption. If his medical costs and cost of care is less than is raised in his name, additional funds will provide care for other animals.