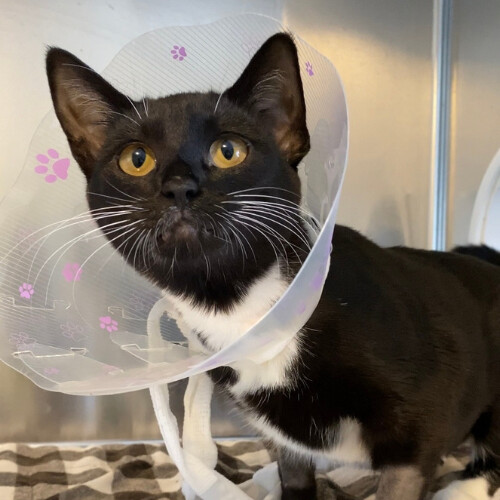 Salty was heavily pregnant when she arrived, a young mum at only a year old. She manage to give birth to one kitten before becoming very distressed. She was rushed to the vet for an x-ray which showed there were still four babies in her belly who needed help. This caring mum was given an emergency C-section but very sadly all the kittens were stillborn.

A few days later, little Salty started breathing heavily and shelter staff were very concerned - she was rushed in for tests and monitoring overnight. Finally after reviews by a specialist, it was confirmed that Salty had pneumonia. Poor thing had already been through so much. She was provided with the medications she needed and she began to stabilize thankfully. She spent the next three days being carefully monitored at the vet before returning to the shelter for some much needed love and care.

Salty is a darling little cat. She is sweet and can be chatty after she builds trust with the people around here. She hasn't had the best start in life with the living situation she was born into and sadly has had a rough go since coming into care, but despite everything she is still very sweet. She is a little fighter and getting stronger and better every day.

Personal updates for Salty will be provided to anyone who donates to her treatments and care.

*Goal includes: surgery, medication, treatment, regular health check, and daily care for Salty until she's ready for adoption. If her medical costs and cost of care is less than is raised in her name, additional funds will provide care for other animals.