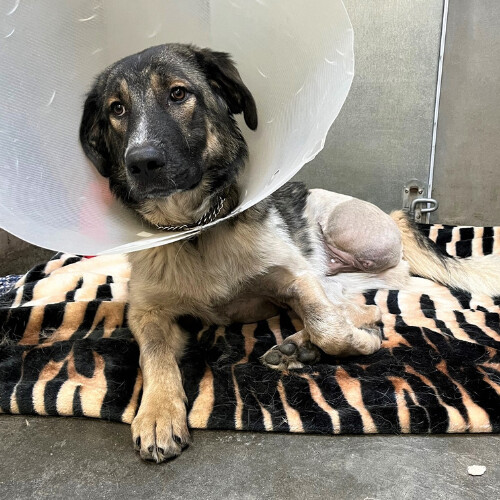 This handsome boy came into care in extreme pain from infected wounds after a fight with another animal. Chief was a stray who was found by an animal lover who thankfully knew to bring him in for care at their local BC SPCA. His brave face was hiding the pain he was in.

Chief was suffering from multiple infected wounds on each of his legs and his stomach, as well as a fracture in his hind tibia. The vet team were quick to get into action, deciding that the amputation of his worst leg was the best option for young Chief. After cleaning up his many wounds, he was booked in for surgery and has also been on a course of medications to help him with the pain, as well as numerous cold compresses daily to help reduce his swelling.

Even though Chief was found as a stray, he is still a sociable boy who loves meeting people. The shelter staff describe him as "a rambunctious overgrown puppy who is quickly learning to be polite on the leash and when meeting new human friends". He loves to please and enjoys the new tricks he's been learning in training.

Chief is a sweet natured, handsome pup who has already been through a lot of trauma, but we know he'll make a perfect companion once he's fully recovered from his surgery.

Personal updates for Chief will be provided to anyone who donates to his care.

*Goal includes: surgery, medication, treatment, regular health check, and daily care for Chief until he's ready for adoption. If his medical costs and cost of care is less than is raised in his name, additional funds will provide care for other animals.