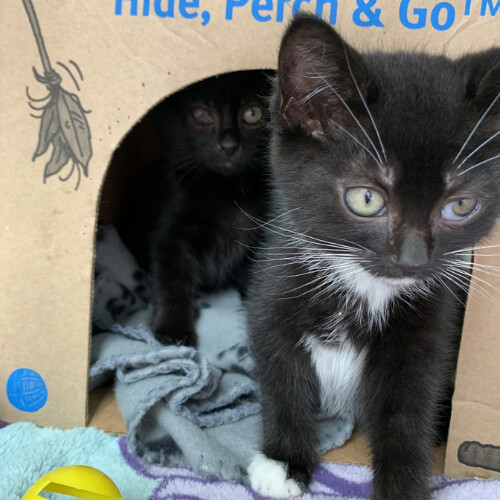 Kitten brothers, Darren and Diablo, both had bad conjunctivitis in their eyes that needed immediate attention. We took them straight to the vet and both D&D were put on antibiotics and medicated eye drops to soothe their suffering. Darren has been healing well but Diablo's right eye was already in severely bad shape on arrival and he was diagnosed with chemosis - swelling around his cornea. Poor little guy. He hasn't been responding as well as we'd hoped to treatments which means the vet has decided removing his eye will be best for little Diablo in the future.

Diablo will need to wait before his surgery until he's a little bigger and has gained weight, so for now these kittens are in a loving foster together. They are both very bright, playful and love to cuddle! Darren is more outgoing and talkative, reaching out with a friendly pay if he thinks he isn't getting enough attention. Diablo is a little more withdrawn, potentially due to his limited vision, but is more comfortable once he gets a sense of his surroundings. They love to play and cuddle up together, as lots of littermates do!

Personal updates will be provided to anyone who donates to their campaign.

*Goal includes: surgery, medication, treatment, regular health check, and daily care for Darren and Diablo until they're ready for adoption. If their medical costs and cost of care is less than is raised in their name, additional funds will provide care for other animals.