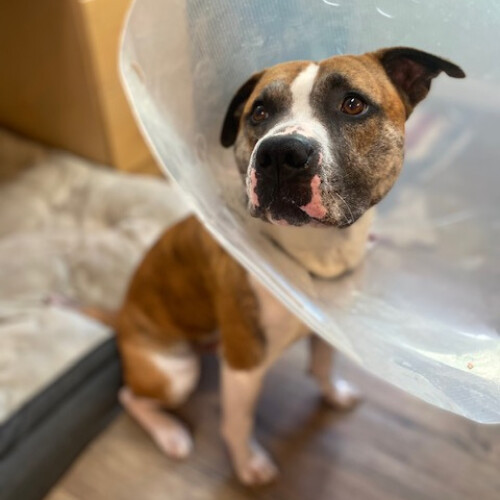 Spud was skinny when he was found roaming the streets by an animal lover who bought him in. He had a suspicious lump on his tail that was also concerning staff and needed a good meal or two.

After a thorough vet exam, it was decided that the second half of his tail would be amputated during his neutering surgery because the lump was looking worrying like a cancerous growth. Poor boy. He was put on strict rest, given a cone and provided with medications after his surgery, as well as some rechecks and bandage changes to support with his recovery.

Spud is super loving! He's been very patient (if a little frustrated at times) during his rest period where he needed to wear a cone. Not his favourite but he's been so well behaved. He loves to snuggle up with his people and also play with his dog buddy when he's not resting. He's a very happy pup who wants to please and show you his tricks!

Spud is a big sweetie, who's going to make a loving companion once he's completely healed.

Personal updates will be provided to anyone who donates to Spud's campaign.

*Goal includes: surgery, medication, treatment, regular health check, and daily care for Spud until he's ready for adoption. If his medical costs and cost of care is less than is raised in his name, additional funds will provide care for other animals.