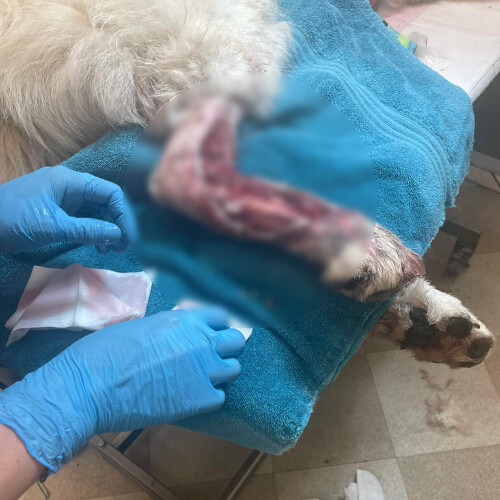 Nine-month-old Maremma, Charlie, arrived with a shocking injury, it was hard to even look at... His right hind leg was completely degloved after being hit by a car.

The damage was extreme - severed tendons and exposed bone and hock joint, as well as a wound under his armpit. This poor growing pup was in severe pain. His injury was too extreme for suturing and the damage meant his joint had abnormal flexion. The best next step for young Charlie according to the vet was to remove his leg.

Charlie was booked in for amputation surgery right away to put him out of his pain. We really didn't want him to suffer any longer than necessary. Charlie is the sweetest, he is easy going, friendly and enjoys meeting new people. He is a quick learner and that's been helping him post-surgery to learn how to live life as a tripod!

Can you give this adorable boy hope for his future by contributing towards his surgery and care?

Personal updates will be provided to anyone who donates to Charlie's campaign.

*Goal includes: surgery, medication, treatment, regular health check, and daily care for Charlie until he's ready for adoption. If his medical costs and cost of care is less than is raised in his name, additional funds will provide care for other animals.