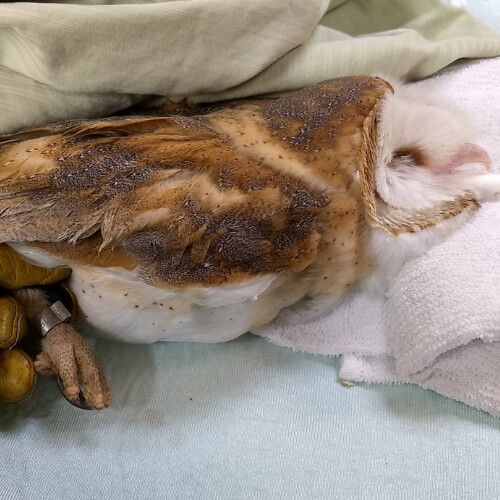 Found bleeding and cold in a ditch, this owl was having a bad day when a good Samaritan found him.

Barn Owls are a threatened species in Canada, and aren’t very common outside of southern British Columbia and southwestern Ontario. There is an established population of Barn Owls in the Greater Victoria area, and the Wild ARC team has been glad to help a few of these amazing owls in the past. So when one of these uncommon patients arrived at the beginning of June, the team was happy to help another.

The finder knew right away that the Barn Owl needed help, and they helped him get to Wild ARC for much-needed medical treatment. When he arrived, this owl was in shock and his wing was severely wounded. In critical condition, rehabilitation staff worked quickly to stabilize him and keep him comfortable until the full extent of his injuries could be assessed.

Once stable enough for a thorough exam, it was found that this Barn Owl’s wound was deep, severely bruised, and some of the skin around it had begun to die. But, luckily, he didn’t have any fractures and all of the wing’s vital tissues appeared to be intact on initial assessment. Wildlife rehabilitators also noted the band number on his leg indicating this owl had been observed and banded in 2016 when he hatched! 8 years on, this flighty fellow is quite old for a wild Barn Owl!

The rehabilitation team started an intensive treatment plan including pain medication, fluid therapy and frequent wound care to get him ready for a procedure to assess the full extent of the damage, and see if it could be repaired.

Several days of a species-specialized diet and supportive care saw him stable enough for what we hope is his last major procedure. His wound was thoroughly cleaned and the dead tissue removed, showing healthy skin and muscle that was likely to heal with enough time and care. Carefully sutured and bandaged, the Barn Owl began his next stage of recovery.

Now, days after his procedure, this Barn Owl’s feisty spirit is starting to show. He no longer looks defeated and in pain, and instead is looking more and more like the wild animal he should be. Although we are optimistic about this improvement, he still has a long way to go before he’ll be cleared for his release home. While his wing heals, he’ll need to keep his weight up with a specialized diet and have frequent exams to monitor his progress. Once up to it, he’ll be moved to an outdoor enclosure where he can build up the strength in his wing again, and eventually practice flying.

We can only guess at what caused this beautiful bird such an injury, but what we do know is urbanization and the loss of grasslands and old field habitats play a major role in this population’s decline. Before bulldozing, building, or tearing down a potential habitat, please check to see that there aren’t any current inhabitants and think about ways to allow wildlife to continue living safely in the area afterwards.

You can help this handsome hooter directly by donating to his care.

If the cost of care is raised for this owl, additional funds will provide care for other wild animals in need.