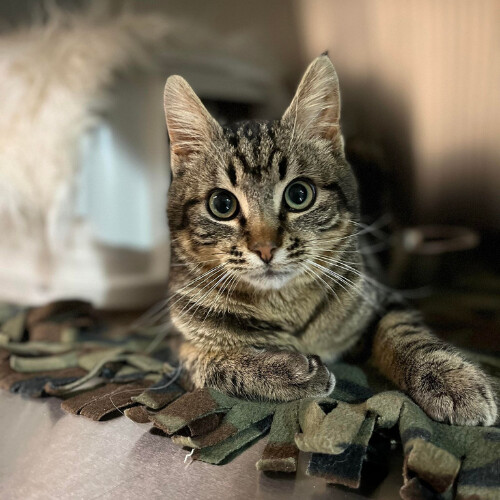 Ringo stopped eating and became worryingly ill. He'd been found wandering someone's property and was brought in to their local BC SPCA Animal Centre. It took some investigation to determine what was going on with little Ringo - bloodwork, radiographs and ultimately hospitalization.

We discovered that he had elevated liver enzymes which flagged an issue that needed further investigation and treatments. Ringo was put on daily medications for two weeks and we're monitoring him closely before doing repeat testing. Staff are keeping everything crossed we get good news!

Ringo is the sweetest fella!! Despite having a very rough start to his young life, he is quick to forgive humans. He doesn't appreciate his daily medication, but forgives so easily - we think he knows we have his best interest at heart. It doesn't take him long before he's rolling over on his back asking for belly rubs! Ringo always says "hello" and so much more whenever he sees you. He is a big fan of direct eye contact and really connects with whoever he is spending time with.

Personal updates for Ringo will be provided to anyone who donates to his campaign.

*Goal includes: surgery, medication, treatment, regular health check, and daily care for Ringo until he's ready for adoption. If his medical costs and cost of care is less than is raised in his name, additional funds will provide care for other animals.