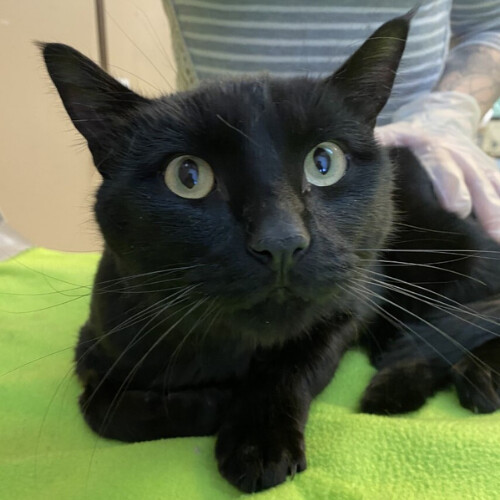 Brody arrived with a broken hip after some rough and tumble out in the barns. We're not 100% sure what happened to him but the youngster was clearly in need of emergency attention, so we're happy he found his way into our care.

Brody has needed a surgery to fix his hip to help him live pain-free again. He's only young so we have every confidence he's going to recover well from this! He's already had the successful surgery, but his follow up care is just as important so he still has a way to go before we can find him his forever home.

Mister Brody is the sweetest boy who's won the hearts of staff at the shelter! Even struggling with a broken hip, he has still been showing the team just how cute and handsome he really is. Brody hasn't been loving his medications after surgery, but sweetly tries his hardest not to cause a fuss. He lets his foster administer them with a little scowl on his face. He's doing his best to eat and drink, and has even made attempts to use the leg since his big surgery! Mostly, he likes to sit in front of the window and bird watch while giving that hip a rest. A perfect patient :)

Personal updates for Brody will be provided to anyone who donates to his campaign.

*Goal includes: surgery, medication, treatment, regular health check, and daily care for Brody until he's ready for adoption. If his medical costs and cost of care is less than is raised in his name, additional funds will provide care for other animals.