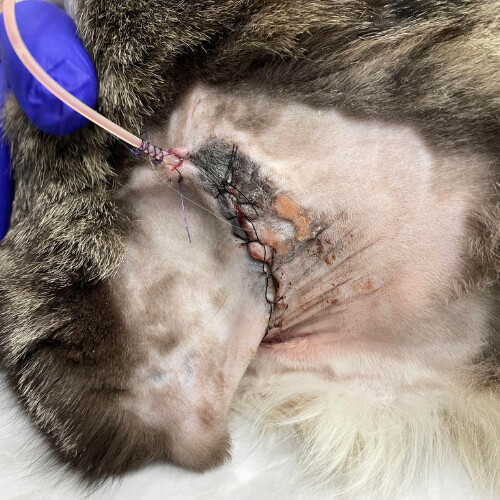 Left behind after his owner was evicted, Topper was found with a collar wrapped around his neck and front leg. It had sawed through the flesh behind his leg creating a deep, open wound. Thankfully a good Samaritan called the BC SPCA for help when they found him. He was hungry, thirsty and clearly in pain.

Topper needed emergency surgery because of the severity of the wound caused by the collar. He's now getting careful post-surgery monitoring because of the drainage tube connected to the healing wound that need changing twice a day. This kitten's also been given medication to help him manage the pain and a special feeding plan after being deprived from food for several days before he was bought in for help.

Despite what must be a very painful wound, Topper is a bubbly affectionate purrbox! During the vet's initial assessment, Topper climbed up to her shoulder to deliver face smudges. He's really won over everyone at the vet hospital who have done an outstanding job of looking after him. He's now recovering at the shelter where he can get the attention and checks he needs; when Topper hears the staff coming up the stairs he calls out to them to say hello :) Everyone loves Topper.

Personal updates for Topper will be provided to anyone who donates to his campaign.

*Goal includes: surgery, medication, treatment, regular health check, and daily care for Topper until he's ready for adoption. If his medical costs and cost of care is less than is raised in his name, additional funds will provide care for other animals.