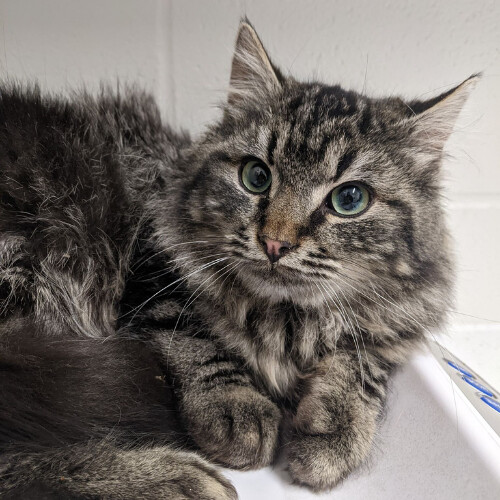 John was not eating well when he arrived with the BC SPCA which raised concern with staff. When he also began vomiting they knew something was up and rush him to the community vet for bloodwork and radiographs. It became obvious that there was something foreign in his stomach but it was hard to tell what it was... The vets decided the best next step was to perform emergency surgery on the six month old kitten.

Poor little guy had a whole bunch of plastic wrap removed from his stomach during the procedure. A sad reminder of one of the environmental impacts our trash has when left around for animals like John to eat. But we were happy to see him feeling a lot better after the surgery!

Little John has been quite fearful of humans during his stressful experience of feeling unwell, but it's been great to see him recovering well and we know with the right care he's going to start building his trust again. He just needs some love in his life.

Can you show John your love as he starts the next chapter of his story and we find him a forever loving home. Please donate towards his surgery and treatments.

Personal updates for John will be provided to anyone who donates to his campaign.

*Goal includes: surgery, medication, treatment, regular health check, and daily care for John until he's ready for adoption. If his medical costs and cost of care is less than is raised in his name, additional funds will provide care for other animals.