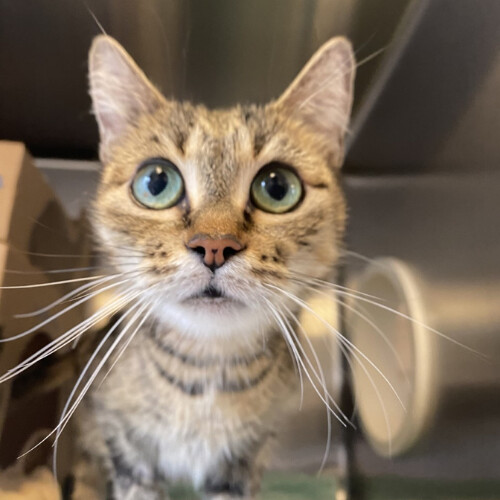 WARNING: graphic details included which some readers might find difficult to read.

Senior kitty, Minnie, arrive to us with a serious and life-threatening infection in her uterus. Pyometra is associated with a condition known as cystic endometrial hyperplasia (CEH). In short Minnie was suffering in extreme pain as her uterus filled with pus. We're just thankful that she came to the BC SPCA when she did.

Minnie needed emergency spay surgery to remove the enormous mass that her uterus had become. On top of the growing mass in her belly, little Minnie was severely underweight after not eating properly as a result of her condition, as well as vomiting and diarrhea. She's been suffering for well over a month.

This beautiful senior tabby is gentle and sweet. She really deserves a second chance. After her emergency surgery, our team started to see her true personality come back into Minnie's frail body. She's been through a lot but she's coming towards the light at the end now.

Minnie has needed two major surgeries including an additional oral procedure, as well as medications to manage her pain and a diet to support her to build strength again. We're so happy to see her growing stronger by the day!

Minnie relies on people like you to help her get the urgent care she's needed - please donate towards her surgery and treatments.

Personal updates for Minnie will be provided to anyone who donates to her campaign.

*Goal includes: surgery, medication, treatment, regular health check, and daily care for Minnie until she's ready for adoption. If her medical costs and cost of care is less than is raised in her name, additional funds will provide care for other animals.