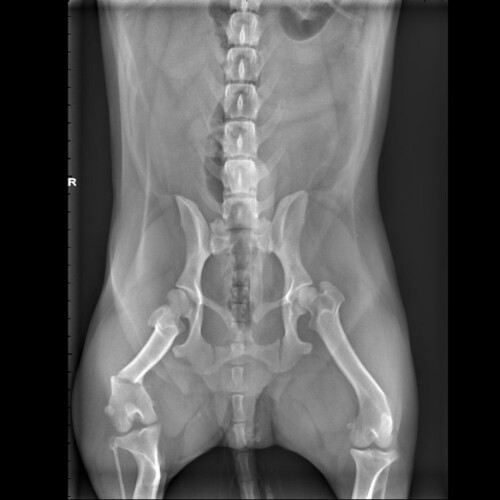 Lucky by name, not so Lucky by nature... This little pup was hit by a car and suffered a badly broken hind leg as well as the skin being stripped from his tail. Luck was on his side though when a good Samaritan saw the injured Spaniel - Shih Tzu mix and realized the need for urgent action. Lucky was rushed to the vet hospital for emergency care where the BC SPCA was able to step in and get him the surgery he needed immediately.

His injured tail was in such a bad way that it had to be amputated. Thankfully his leg was able to be saved but needed extensive plating for his femur to help it to repair fully. He'll need between 6-8 weeks of care in total due to the extent of the damage caused by the car. Little Lucky still has a way to go with his recovery but he's been such a champion throughout!

Lucky is a sweet guy who deserves to live a life without pain. Since coming in to care he's spent most of his time at the vet clinic where the staff have been kindly caring for him and making sure he hasn't been in pain. He was recently moved to be with a foster for the next leg of his recovery journey - he is a complete love bug who can't resist peanut butter! He's bonded with their cat and younger child who enjoys curling up on the couch with Lucky for naps :) We know he's going to make a wonderful addition to his forever family once his leg is fully knitted back together again.

Little Lucky has many happy years ahead of him, will you help him enjoy them free from pain by donating towards his emergency care and surgery?

Personal updates for Lucky will be provided to anyone who donates to his campaign.

*Goal includes: surgery, medication, treatment, regular health check, and daily care for Lucky until he's ready for adoption. If his medical costs and cost of care is less than is raised in his name, additional funds will provide care for other animals.