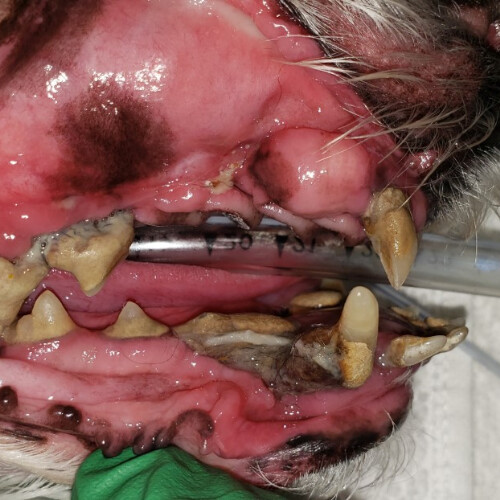 At 15-years-old, Teddy had practically never been to the vet... and it showed. This old sweetheart needed some serious attention. He was severely matted, both ears were infected, his nails were overgrown and he had severe dental disease. On top of this he was struggling with back problems that showed with a funky gait.

Little Teddy, a Maltese-mix, has needed extensive grooming, bloodwork, urinalysis and major oral surgery. He was prescribed an allergy diet due to poor skin condition, in conjunction with his infected ears, being a sign of food allergies. His skin was red and irritated, flaky and rashed. Poor senior boy! He's also been on antibiotics, ointments for his ears, pain relief - the list goes on.

Teddy's surgery was very delicate. There was a risk of breaking his jaw because of the damage to his bone structure due to infection. He really need a specialist to help remove all his teeth before stitching him up to help his mouth heal. This was one of the worst dentals our branch had ever seen! It's been important that Teddy has stayed in foster with our staff during his recovery to ensure he gets everything he needs to avoid infection including a special diet and daily mouth flushes after he eats to keep his wounds clean. It's been a long road and he still has a way to go.

Teddy is the sweetest guy around, he waddles and doddles after his foster and howls when he is left alone. When he is with people he is at his happiest. He loves food and begs with his little puppy eyes, and has been a trooper through all his waiting and treatments. He waited for years to feel as good as he does now and it really shows. His whole body is more relaxed even with all the stitches and trauma to his mouth, he is more excitable and is extra cuddly, giving lots of kisses that he wasn't prior to surgery. After baths he turns into a pup again, skidding down the halls even with his stiff back legs.
He is such a love and he sleeps on his foster mom's bed, and loves the kids in the family as well as his "twin" foster brother dog that he would follow to the end of the earth.

Teddy has been through a lot but he's coming towards the light at the end of the tunnel. Can you help him get there?

Personal updates for Teddy will be provided to anyone who donates to his campaign.

*Goal includes: surgery, medication, treatment, regular health check, and daily care for Teddy until he's ready for adoption. If his medical costs and cost of care is less than is raised in his name, additional funds will provide care for other animals.