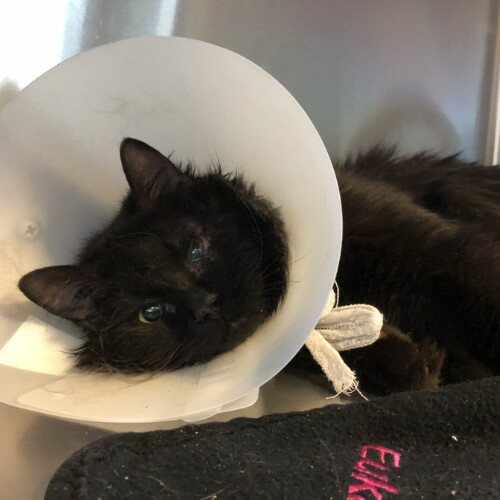 Orion's scruffy appearance makes him look much older than he really is - only a year! He arrived as a stray in need of some love and care - a shy boy with a weepy eye. Upon further vet inspection it became clear the extent of what this kitty needed. Vaccinations, eye drops for his severe conjunctivitis, entropian surgery to fix an inward curling eye lid, neutering and oral surgery because his baby teeth hadn't fallen out when they should have. He's been in a lot of discomfort in his mouth and they need to be removed so this poor boy can eat all his favourite snacks in peace without pain. No wonder he looked so sad!

He'd been found in a rural area by an animal lover who patiently spent two weeks working to gain Orion's trust so she could bring him in for much needed medical attention. When he got here he was greasy, shy and frightened. Living in pain due to his eye issues, mouth health and having to fend for himself.

Orion has such a unique personality, it's as if he completely missed the memo that he's meant to be a cat! He is extremely curious, rolls around like a dog, loves his blanket and LOOOOOVES cat nip. At the mere sight of cat nip he starts to drool uncontrollably. Also when he naps, he naps hard! At one point we thought he was deaf, but he was just having the world's best nap. We've all been there!

Could you help this sweet boy enjoy his catnip and naps without pain?

Personal updates for Orion will be provided to anyone who donates to his campaign.

*Goal includes: nasal scope surgery, neuter, x-rays, medication, treatment, regular health checks, and daily care for Orion until he's ready for adoption. If his medical costs and cost of care is less than is raised in his name, additional funds will provide care for other animals.