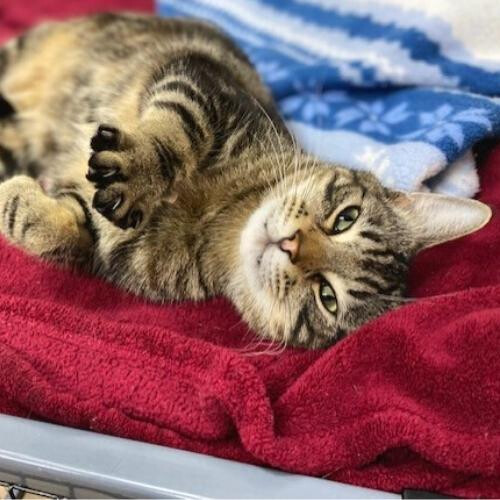 Beyond the cute curled feetsies, this kitty has been through quite through the ordeal. Oliver came into our care when he had a urinary blockage - one of the worst the vet clinic had seen.
He had a catheter placed and the blockage was flushed, but it was so bad there was sludge when the catheter came out and there was a very high risk of him getting another blockage within the next couple of days after the procedure. He was placed on Metacam, Gabapentin and Apo Prazo to keep him stress free and reduce any inflammation to avoid re-blocking.
He has been monitored closely for any signs of urinary issues such as frequency and quantity of urine in the litter box, fed a special Urinary diet to prevent more crystals from forming, and promote more drinking. His diet is mostly canned food at the moment to increase moisture intake.
He will need to stay on his urinary diet lifelong since he is prone to blockages, as well as be adopted to a low stress home with no other animals to reduce his risk.

Luckily, it has been pretty easy keeping him happy and stress free here in the shelter because he is such a good, chill boy but he really loves attention so the poor staff has had to spend lots of time giving him cuddles, oh no!

He gives hugs, stands for pets and loves to just watch his people. He has also been known to cuddle up under his blankets and make himself a cozy cave.

we love Oliver, staff favourite for sure.
Please help Oliver get to his happily ever after by heling with his medical needs by donating now.

Personal updates for Oliver will be provided to anyone who donates to his campaign.

*Goal includes: surgery, medication, treatment, regular health check, and daily care for Oliver until he's ready for adoption. If his medical costs and cost of care is less than is raised in his name, additional funds will provide care for other animals.