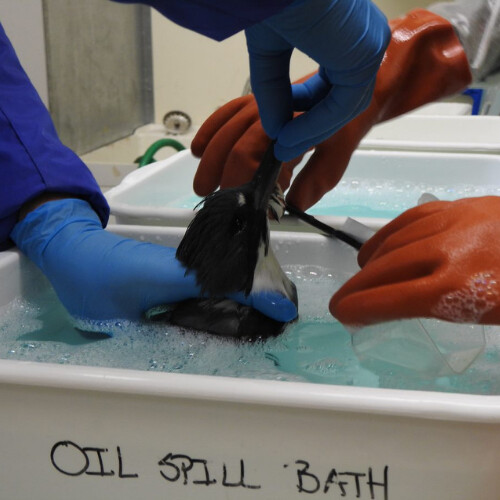 Cold, weak and soiled, this poor bird had struck a window hard. Luckily, someone called Wild ARC for help. We were able to get the bird safely contained and transported to our centre for an exam to determine the extent of his injuries.

Upon arrival, the rehabilitation team identified the bird as a Belted Kingfisher, and began treating him for shock and severe head trauma. While he didn’t have any obvious injuries, he was very unsteady and using his wings to balance himself when standing. He wasn’t stable enough for prolonged exams or treatments, so the rehabilitators had to work quickly when handling him to try and keep his stress levels as low as possible.

While wild animals are in care, they are very stressed and may not behave normally. This Kingfisher was frequently open-mouth breathing, related to his head trauma and a sign of severe stress. As well, he refused to eat any of the food that was offered to him. To ensure he received the nutrition he needed and to keep his strength up, he had to be manually fed twice a day for over a week. During this time, his prognosis was very uncertain, as the progress he had shown was minimal - the team was concerned he may not improve at all.

After nearly 2 weeks in care, this beautiful bird suddenly began eating and showing great improvements. With his behaviour and appetite returning to normal as the head trauma resolved, the team was happy to see him finally coming along. Unfortunately, upon testing his waterproofing in preparation for the transition to an outdoor enclosure, it was determined to be too poor for him to maintain his body temperature, which would have lead him to become waterlogged and cold.

The rehabilitation team knew they had to fix this quickly as the Kingfisher had already been in care for an extended period of time, and it was in his best interest to be released as soon as possible. Blood work and another thorough exam confirmed the Belted Kingfisher was stable enough to be sedated for a bath to clean any soiling from his feathers. Our rehabilitation team’s extensive experience meant that this bath went very well!

He was slowly introduced to an outdoor enclosure to work on building his flight muscles back up from his time spent inside. After a few days in an outdoor enclosure, the Belted Kingfisher was flying beautifully and had excellent waterproofing. The decision was then made to release him back into his wild home as his rehabilitation was complete.

This Belted Kingfisher had quite the experience while in care. Despite many uncertainties and set-backs, we’re grateful we were able to give him a second chance at a wild life. We are asking for help to recuperate the costs of care for this bird. Specialized diets, different enclosures, and extensive staff knowledge and care are just some of the expenses we have from caring for this beautiful bird.

You can help this fantastic fisher by donating today! If the cost of care is raised for this plunging piscivore, additional funds will provide care for other wild animals in need.