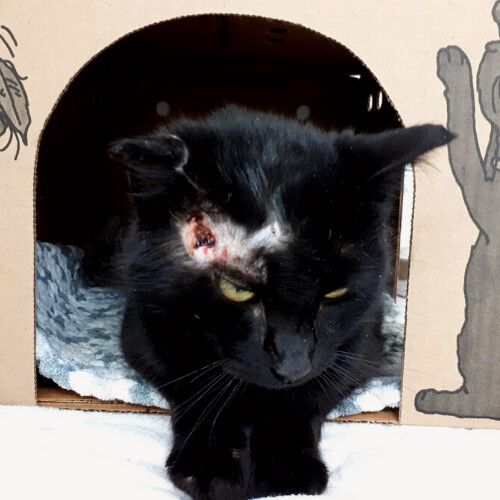 Beans, Charlotte and Sir Hootsalot found themselves in life or death situations during the recent cold snap. Living out in bitter -50 temperatures was a terrifying experience for these kitties! They were each found as strays in distress. Beans was so frozen she could not move her body.  Laying lifeless on the steps of a Good Samaritan's home; they thought she was dead and went to move her when she slowly opened her eye and uttered a meow.

Severely dehydrated, emaciated and hypothermic each of these cats were on death's door when they were found.  They were immediately hospitalized for multiple days for IV fluids and warming.  Each has started a re-feeding schedule receiving small amounts of food several times throughout the day and night.

Sir Hootsalot will require amputation of his tail as the frost bite has killed the tissues.  Charlotte has suffered substantial injury via frost bite/trauma to her face which has become infected and swollen. She is on antibiotics, epsom salt baths and may need stitches to repair tissue loss. All cats are loosing their ears and have peeling toe pads. These poor frost bitten kittens!

Despite their terrible recent living conditions, each of these beautiful felines are beyond thankful for their salvation. Offering snuggles and affection during all interactions.  Even during her epsom salt wound soaking, Charlotte is happy to lay in your lap and kneed the air in content.  We have no doubt that once their tummies are full and the wounds have healed these three will make amazing companions for their new families!

These animals were lucky to beat their certain deaths thanks to the kind hearts of the Good Samaritans who opened their homes for these animals. Could you now provide them with the medical care they need by showing your love and donating towards their treatment?

Personal updates for these kitties will be provided to anyone who donates to their campaign.

*Goal includes: surgery, medication, treatment, regular health check, and daily care for each of these cate until they're ready for adoption. If their medical costs and cost of care is less than is raised in their name, additional funds will provide care for other animals.