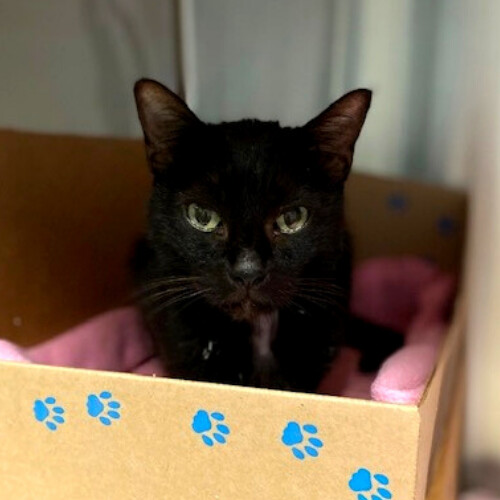 Hector was found by a Good Samaritan, or really Hector found them! He waltzed into their home for safety and food after being a stray for who knows how long. At 13 years old, this sweet boy had been alone for a long time and was in a rough way. He has needed months of care to heal him.

When he arrived, he was extremely malnourished, covered in fleas, suffering from horrible diarrhea and a severely painful mouth. We immediately started him on a specialized diet, dewormer and probiotics. He was in need of oral surgery to help him eat without pain, but the vet said he was too fragile for surgery until he had put on more weight. Hector has been patiently waiting to get the help he needs while he slowly gains strength.

Next poor Hector developed an upper respiratory infection causing him to sneeze a lot, as well as live with nasty nasal and eye discharge. We helped him with medications, vitamins and eye drops which helped to ease the discomfort for this loveable old man.

He has been in care for so long and handled it all very well. When he started feeling better he began playing and became very vocal, in the best way! While growing in strength ahead of his surgery, Hector has been in foster where he settled in quickly. Apparently he quickly found his favorite spot in the bed between his foster parents! He also sussed out where the treat cupboard was and makes sure he's rewarded for being a good boy ALL the time!

Hector is a very special senior boy. His road to recovery has been long, but with his surgery this month, he's almost ready to find his forever home. Will you help Hector know a pain-free life for his final years by donating towards his surgery and care?

Personal updates for Hector will be provided to anyone who donates to his campaign.

*Goal includes: surgery, medication, treatment, regular health check, and daily care for Hector until he's ready for adoption. If his medical costs and cost of care is less than is raised in his name, additional funds will provide care for other animals.