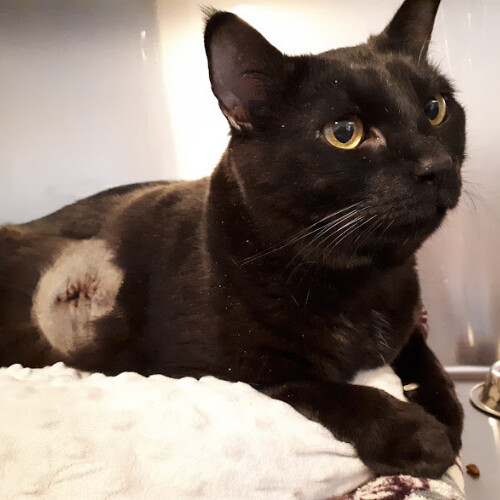 Attacked by his brother of many years, Leonard suffered a serious wound and emotional trauma putting this old boy in a terrible way. The 10-year-old's cat brother started to medically decline and became aggressive towards his sibling with no warning. His loving family were put in a difficult position with no choice but to separate the two so they could both get the care they needed.

Leonard is a super sweet elderly man and can be very affectionate. He can initially be a little shy but once he realizes he's in a safe space his true personality really starts to shine. We know he will make a loving companion to someone once he's fully recovered.

When he arrived he needed his wounds tended to immediately as well as fluids, bloodwork and urinalysis. His biggest wound was infected so we're keeping a good eye on it because it was right down to the bone -poor boy! He had some surgical repair and suturing, as well as a course of pain meds and antibiotics to help him along the way.

Will you help senior Leonard heal for the holidays? Please donate towards his surgery and care so he can find his forever family and live his final years peacefully.

Personal updates for Leonard will be provided to anyone who donates to his campaign.

*Goal includes: surgery, medication, treatment, regular health check, and daily care for Leonard until he's ready for adoption. If his medical costs and cost of care is less than is raised in his name, additional funds will provide care for other animals.