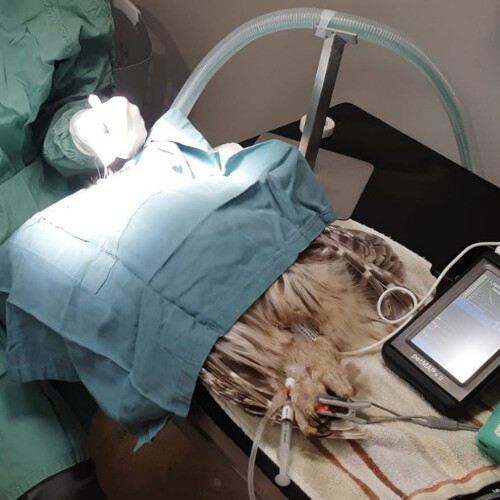 Sad, bloodied and soaked to the skin on the side of the road was how a Good Samaritan found this Barred Owl on their morning commute. During the November rainstorms this majestic bird was hit by a car and left for dead. Luckily, the rescue mission brought the owl into care at Wild ARC.

Upon arrival, the owl was given pain medication, fluids to help with dehydration, and placed in an incubator to warm up and dry off. Once stabilized the owl was given a thorough exam and had their (luckily) minor wounds cleaned. During the exam, wildlife rehabilitators also discovered the owl’s right eye wasn’t responding to light stimulation. Thankfully, an animal ophthalmologist working with a local veterinarian was able to examine the owl shortly after admission.

While the Barred Owl was sedated, the ophthalmologist found that the owl was blind in their right eye. The swelling was so extreme that they were unsure if the blindness was permanent, or caused by the swelling. A steroid was prescribed to reduce inflammation, and see if the owl’s eye improved. The rehabilitation team at Wild ARC kept the owl on a strict medication and fluid therapy regiment during this time, and the owl showed small improvements in their behavior and eating habits. Despite being on the steroids for two weeks, a re-check with the same ophthalmologist determined that the eye was non-visual, and that removal of the eye was the best option for the owl’s recovery.

Owls have binocular vision, meaning they are able to view objects with both eyes at the same time. Unlike prey species, they don’t need to have both eyes to be able to survive in the wild. Their hearing is their main tool when hunting, and as long as they can hear and have one working eye, they can do very well in their natural habitat!

After surgery, this owl has continued to have a great appetite, and the surgery site is healing well. Once healed and given the okay from wildlife rehabilitators and the ophthalmologist, this beautiful bird will get to practice adapting to their new normal in our large flight pen. Until then, they will be closely monitored with regular check-ups and a specialized diet plan to ensure they continue progressing well. While not out of the woods yet, we’re hopeful for this Barred Owl’s eventual release back into their wild home.

You can be there for this extraordinary owl by donating towards their specialized care today! We will update you about how your donation has helped care for this patient. If the cost of care is less than is raised for this raptor, additional funds will provide care for other wild animals in need.