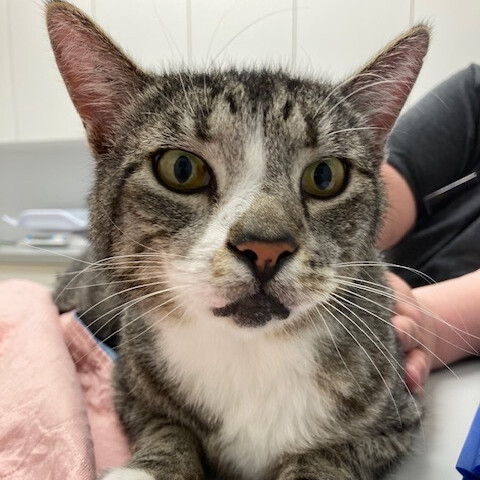 Ford arrived into care after he was sadly left abandoned in an apartment when his previous owners moved away. He was discovered by the landlords who spent some time with him to make sure he was ok and gain his trust before bringing him to the shelter.

Ford was given a thorough examination where it was discovered that he has severe skin issues with open sores under his armpits and down his belly. He had a very large and strange lump on the inside of his thigh that was of concern, so he had surgery to have the lump removed and tested.

The lump turned out to be a result of a severe skin infection, most likely caused by a flea allergy that was left untreated. Ford is on medication to help his skin heal and he’s looking better each day!

Ford is thankfully not changed by his terrible ordeal. He’s very much an ‘in your face with love’ friendly cat. He loves attention, pets, and will soak in as much attention as someone will give him. He loves everyone he meets and has been an absolute trooper through his procedures, recovery, and medications!

Ford requires about five weeks of recovery to make sure he is completely healthy before finding a furever family he can give all his love to!

Will you help this adorable boy by donating to his care?

Personal updates for Ford will be provided to anyone who donates to his campaign.

*Goal includes: medication, treatment, regular health check, and daily care for Ford until he’s ready for adoption. If his medical costs and cost of care is less than is raised in his name, additional funds will provide care for other animals.