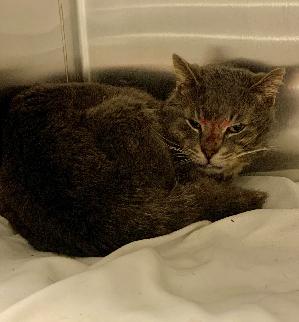 Skelly had been hanging around a neighborhood for some time before he started sneaking into someone’s home through the dog door to steal food. Unable to catch him on their own, they reached out for help and borrowed a trap to help bring him in.

Skelly was brought in and urgently rushed to the vet who says he was literally on death's door. He was incredibly weak, dehydrated, starving, with bloody bathroom trips. He also has a painful ulcer on the roof of his mouth, a blister on his tongue, his paw pads were peeling, and he was covered in scratches and punctures from other animals.

This little cat is such a survivor. He was named him Skelly because he was so skinny when we arrived that you could see his bones through his skin. He was given an IV to help get fluids and antibiotics in his body and he’s on a meal plan to help him get to a healthy weight.

Skelly is receiving treatments for the issues in his mouth and medications with bandage changes for his wounds. He’s a bit timid but very sweet. He is starting to feel better and more of his personality is shining through each day.

Skelly has his whole life ahead of him, he just needs to be shown the love he’s been desperately missing. Will you help him?

Personal updates for Skelly will be provided to anyone who donates to his campaign.

*Goal includes: surgery, medication, treatment, regular health check, and daily care for Skelly until he’s ready for adoption. If his medical costs and cost of care is less than is raised in his name, additional funds will provide care for other animals.