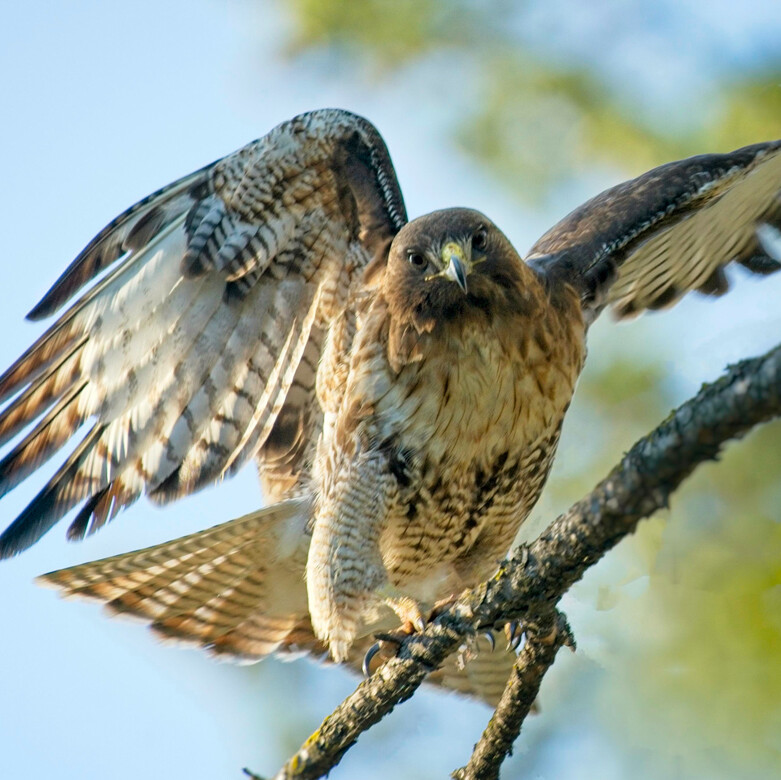 There are many reasons why a wild animal might be admitted to Wild ARC, and sometimes we may never know what the exact cause may be. This was the case with a Red-tailed Hawk that came in near the end of last year. The hawk was rescued by a kind member of the public who had been watching them for a while. The finder called Wild ARC and then with support from our staff over the phone, safely contained the hawk once it stopped moving.

Upon arrival, the bird was alert, however, was displaying signs of shock. The patient was given a brief exam to minimize its stress while in this fragile state, then put in a quiet place to rest and regain its composure. A more thorough exam was conducted later, after the hawk’s condition had slightly improved. It was dehydrated, had a few small wounds that were already in the process of healing, and a swollen foot. Although its condition was improving, the Red-tailed Hawk was not yet stable enough to undergo an x-ray to confirm whether the foot was fractured or not. Pain medication, intensive fluid therapy, and a specialized diet was administered to help the hawk regain its strength. After a few days, it was stable enough to receive an x-ray and bloodwork, and, luckily, both tests had no abnormal findings.

The Red-tailed Hawk continued to show an interest in eating, and appeared brighter each day with the help of supportive care. The patient has now been moved to an outdoor enclosure where it can practice short flights to rebuild its stamina until it is ready for a successful release back into the wild.

While progress has been made, the hawk still has some time to go in care, and its prognosis could change unexpectedly. Frequent monitoring, specialized diets, enclosure maintenance, and care from our trained rehab team will help give this hawk the best chance at release. If you would like to help us continue caring for this Red-tailed Hawk, please consider donating to it’s care!

Personal updates for the Hawk will be provided to anyone who donates to it’s care.

Update on the Red-tailed Hawk: Over the weekend the rehab team decided that it was time to release this Red-tailed hawk in our care. It was transferred to one of our outdoor enclosures a few days ago, where it continued to receive care and where it’s flight continued to be tested, until our staff determined the hawk was ready for release. Becky, one of our incredible Wildlife Assistants met with the finder where they successfully released the hawk back home and into the wild.