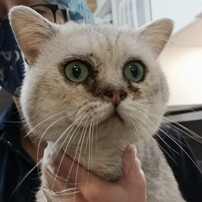 Cat Kobain is a nine-year-old boy who has not been shown the love he deserves. He was recently rescued from an unfortunate hoarding situation with nine other cats and one bearded dragon, who were all living in heart-breaking conditions. They had been left for dead, with no food to eat at all… which leads me to the most tragic part of his story. Two cats perished among the hoard, and with nothing to survive on, the nine surviving cats had no choice but to use them as sustenance. We can’t imagine the depth of hunger these kitties must have experienced.

Thankfully a rescue occurred before anyone else was lost.

Emaciated, Cat was in bad shape with a severe upper respiratory infection. He has had multiple visits to the vet to get the infection under control, which is hard due to the fact that he is a Brachycephalic cat or flat-faced cat. He was likely imported from another side of the world so we have had to do extensive bloodwork for foreign bloodborne diseases that are not found in Canada.

He was so underweight when he arrived that he needed a new special diet to help get his weight back up. With Kobain being flat-faced and so neglected, he has many oral health needs, including surgery. Once healthy enough, he can get this surgery as well as his neuter.

Despite everything, this brave cat has been through, he has an amazing friendly personality. He is super playful and will play fetch with toys. Even as a senior, he has lots of energy and absolutely loves people.

Will you show Cat Kobain the love he’s been missing by making a donation towards his care today?

Personal updates for Cat Kobain will be provided to anyone who donates to his campaign.

*Goal includes: medication, treatment, regular health check, and daily care for Cat Kobain until he's ready for adoption. If his medical costs and cost of care is less than is raised in his name, additional funds will provide care for other animals.